Out of the Ashes

The Cross at Ground Zero in June 2002

On September 11, 2001 Sujo John sat at his desk on the 81st floor of the World Trade Center’s North Tower. He could hardly believe what the past several months had brought. Having wed Mary in January of 2000, he was still a newlywed and she was four months pregnant with their first child.  Just six months before, the two had left their native Calcutta, India with only $50, a couple of suitcases and dreams of a better, more prosperous life in the United States. In that short time in America, the two had landed good jobs.  Mary worked nearby—on the 71st floor of the WTC’s South Tower.

As he sat typing an email to a friend from church, Sujo confided that he believed God wanted more for him. Having read the Prayer of Jabez, by Bruce Wilkinson, Sujo wrote, “I’ve been chasing stuff in America. I want to be used of God.”  He finished his email and hit “send”.  It was 8:05 on a beautiful Tuesday morning, and it was time to start working. About 40 minutes later, Sujo was sending a fax and heard a huge explosion that we now know was American Airlines Flight 11 striking the North Tower between the 94th and 98th floors.

Down on his floor, Sujo watched as the world seemed to crumble around him- a huge hole allowed him to see ten floors up.  The building shook violently, walls started to fall apart and jet fuel from the planes caused fires to break out everywhere, making every minute more treacherous for those in the building. Sujo made his way to the stairs along with his co-workers and thousands of other workers in the building.  He remembers the people’s faces saying the “fear of death was written on the face of everyone.”

A short time later, he heard another loud crash when United Flight 175 slammed into the South Tower around the 81st floor, just ten floors up from where Mary worked.  Wondering whether he would get out alive, he was now more worried about what was happening with her.  Sujo tried to use his cell phone and those of people escaping down the stairs with him, but he couldn’t get through to her.  By the time he made it to the ground level of the tower, an area called The Plaza, the horrors of that day really hit Sujo.  Normally, The Plaza was a bustling, lively place, but what Sujo saw was beyond human comprehension.  He said, “This place of life, this place of just exuberance where life would be celebrated has now been turned into a place of death, a place of destruction, as I see hundreds of bodies of people that jumped out of those buildings, people who were in those planes.”

As time ticked away and he made his way through the chaos, away from the North Tower towards the South Tower, he felt the ground beneath his feet begin to rumble. Sujo described feeling as if he were being “sucked into a vacuum” as he heard the roar as the upper floors of the South Tower began to crumble.  He stopped momentarily and huddled with a group of 15 or 20 people and suddenly became very concerned of what would become of them if they all died without hearing about Jesus.

Until this point in his life, Sujo described himself as a “closet Christian”, keeping his faith to himself and never sharing what he believed about Jesus Christ.  Now facing death, Sujo found a boldness he never had and began praying out loud, crying out the name of Jesus.  He then realized those people he was with were also joining him in unison as he prayed.  He went on from there, stumbling through the dust and debris, covered in soot and wondering what became of Mary.

After the dust settled somewhat, Sujo decided to try to crawl back to the group of people he had prayed with a short time earlier, only to find they had not made it, and had been crushed by the hurricane-force wind and debris cloud caused by the South Tower’s collapse.  Downhearted and questioning God as to why He would allow him to survive and not them, Sujo said he felt God’s presence and believed those people were at peace now.  After the North Tower followed its twin and imploded, Sujo was shocked and couldn’t believe he was still alive.  He found himself out in the street, certain his beloved Mary was gone.

After wandering into a shop, he met a young woman who helped pull bits of glass out of his hair and offered to call someone for him.  Just as he handed his phone to her, it began to ring for the first time in many hours.  It was about noon by this time, and the clerk handed the phone back to Sujo.  The caller ID said it was from Mary’s number, but he was certain it was going to be the worst news…that someone was calling from her phone to let him know she didn’t survive.

He was wrong.  When he answered, he heard Mary’s voice.  She told him she had wanted to get to work early that day, but ended up running late.  When they reunited that night, they made a vow to each other and to God that they would make every day of their lives count.  Sujo prayed for God to “rewrite the history of my life”.  He knew that he and Mary had not come to America just to make money, pursue success or have financial security.  He believed that what was important to God was people…all people.

Fifteen years later, Sujo and Mary live near Dallas with their three children and have started an organization called You Can Free Us.  This organization works to abolish the modern-day slavery of human trafficking by rescuing women and children forced into prostitution in the U.S. and around the world. As 21st century abolitionists, Sujo and Mary have made good on their promise to God and have taken their message of survival and hope to people of all ages all over the world. 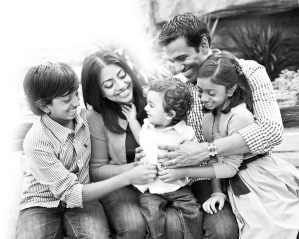 Sujo, Mary and their children

**NOTE:  The following is an article by Sophia Lee, a recently naturalized American citizen, and is an inspiring story of her road to citizenship.

The morning I became a U.S. citizen, I stood between a well-groomed Vietnamese woman and a rotund Mexican man. In front of me, an Armenian with a ponytail raised his point-and-shoot camera. Behind me, a Korean young lady in heels texted rapidly into her iPhone.

“Congratulations,” announced a U.S. Citizenship and Immigration Services (USCIS) officer after the Pledge of Allegiance. “You’ve made it this far.” We were among the 2,176 people of all skin colors, sizes, and ages who raised a right hand to swear loyalty and service to this country at a ceremony in Pomona, Calif., earlier this year.

It felt like a graduation ceremony in that packed stadium of flushed cheeks and enthusiastic whoops. But instead of tossing graduation caps, we waved plastic flags of stars and banners over our heads: After about 10 long years, we’d all finally earned the certificate that grants us the right to proudly declare: “I am an American.”

For us naturalized citizens, being an American isn’t a privilege. It’s a blessing. I say that because eligibility for citizenship follows a long list of qualifications beyond man’s will. As a single, non-military, non-refugee 25-year-old permanent resident, I had to apply for my own citizenship. (Eligibility for permanent residency—or a green card status—is a whole other long, costly process barricaded with tons more checkpoints).

Becoming an American citizen requires lots of patience—and money. Five years after I received my green card (which cost more than $1,000), I filled out and slow-mailed an application form called Form N-400 to the USCIS, together with a $680 check for filing fees.

In that 10-page N-400 form, I had to prove that (1) I lived consistently as a permanent resident in the United States for five years, (2) I lived in my current state for at least three months, and (3) that I was a person of good moral character (no felonies, no terrorist intentions, you get the idea).

About four months later, the USCIS mailed me a thin letter stamped with a date and time for me to show up at the nearest USCIS office for fingerprints. The biometric appointment was pain-free—I was in and out within 20 minutes. Then I waited for two months while the FBI did a run-through of my fingerprints to make sure my background was as clean as I claimed.

The second appointment for an interview took longer. I waited three hours in a crowded waiting room, staring bleary-eyed at a television that replayed—what seemed to my cranky mood at the time—American propaganda. I cracked open a Snickers bar for lunch, dozed off, and then awoke to a USCIS officer calling out my name.

The interview itself flashed by in 10 minutes. I swore that I would tell nothing but the truth, so help me God, and then gave quick “no” answers to questions like “Have you participated in terrorist activities?” and “Did you ever use illegal drugs?”

The officer tested my English skills—I had to write out a dictated sentence—and civics knowledge: “How many amendments does the Constitution have?” My verbal/written skills and moral character must have satisfied the officer, as I got a grant of approval from the USCIS within two weeks, including a schedule for my oath swearing.

And just like that, I became a hyphenated American during a hotbed period of illegal immigration policy discussions. As I waved my flag in the air, I couldn’t help thinking about some of my friends who aren’t as blessed.

For all the despairing talk about America’s draining economy and dismal future, it’s still today’s Rome. A U.S. citizenship guarantees precious rights and benefits denied to much of the world’s population. Whatever reasons immigrants—illegal or lawful—move to the United States, we all share a common desire for an opportunity at something better.

As a person straddling three cultures, I used to pause when somebody asked me what I am. But now I can unhesitatingly answer that I’m an American—albeit an American with a British-Canto Singaporean accent and a 10-pound jar of kimchi in the fridge.

Only in the U.S.A. God bless America!