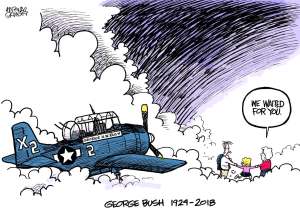 Last Friday, George H.W. Bush, 41st president of the United States, passed away at the age of 94. Today, family, friends, former political rivals and all of the remaining living former presidents gathered in Washington.  Those who would normally be polar opposites politically sat side by side at the state funeral to remember a man who served his nation well from his youth to his elder years.

His passing reminds us that members of “The Greatest Generation” are fading into eternity, and he is the last of our presidents to have served this nation in the military during World War II.  President Jimmy Carter, also age 94, is now the only living president of that generation.

Over the past few days, there have been many touching images captured of our nation mourning a president. One of the most poignant came when 95-year-old former senator and fellow World War II veteran Bob Dole paid his respects at the Capitol rotunda yesterday. Barely able to stand, Senator Dole was assisted to his feet, managed to salute the casket, and sat back down in his wheelchair.  It’s been said that the two of them were often political rivals—though both Republicans—but their rivalry was always about politics and never personal. This was obvious given the reverence with which Senator Dole gave to him yesterday, in spite of his own infirmities. 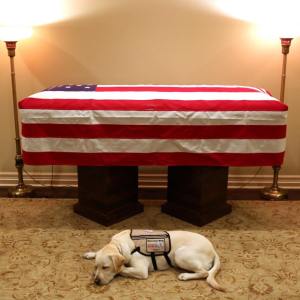 Then there was a visit from President Bush’s service dog, Sully, whose picture (above) lying near the president’s flag-draped casket has gone viral. Sully was issued to the president to be a companion to him shortly after Barbara Bush, his beloved wife of more than 70 years, died in April of this year.

Sully was trained by an organization called America’s VetDogs, and now that his faithful service to America’s 41st president is complete, he’ll move on to Walter Reed National Military Medical Center where he’ll continue to serve a new generation of veterans. If you watch the entire video of Sully’s visit linked above, you’ll also see several disabled people with Sully circling the casket. It was President Bush that signed the Americans with Disabilities Act in 1990. This law, among other things, allowed access to service animals to businesses which had previously banned them.

President George H.W. Bush was eulogized throughout the last several days as the last of the true statesmen, a man of honor and civility, a World War II hero who was shot down by the Japanese over the Pacific and was rescued before the enemy got to him.  His greatest legacy may be his strong faith in Jesus Christ, and his family. Love them or not, it’s hard to argue that the Bush family as a whole has a strong bond of love for each other, loyalty and a firm foundation.  It’s what so many people wish they had in today’s world, but many don’t have. It’s a testament to President and Barbara Bush, as it is for any parents, who build their homes on things that last.

As The Greatest Generation continues to slip from our midst, it’s up to us who are left here to reinforce the values that President Bush and most people of his generation represent: love for God, family and nation, love for our fellow human beings no matter their political beliefs; duty, responsibility and service. Contrary to pop cultural opinion, these aren’t outdated or unrealistic values. They work. For all times, and for all people.

In his inaugural address on January 20, 1989, President Bush uttered a phrase that would become one of his most famous. He said, “America is never wholly herself unless she is engaged in high moral principle. We as a people have such a purpose today. It is to make kinder the face of the nation and gentler the face of the world.”

President Bush left a world that was often neither kind nor gentle, but he’s now in a very different place. Reunited with those he loved and lost, and most importantly, with His Creator. Goodbye, Mr. President, and thank you for your service.