About Those Super Bowl Ads…

The fanatics of the National Abortion Rights Action League (NARAL) have been having a hashtag hissy-fit over a Doritos ad that aired during Sunday night’s Super Bowl 50. It doesn’t take much to offend most people these days, but the religiously pro-abortion crowd at NARAL took to social media after the spot aired.

It features a couple in a doctor’s office. The woman is pregnant and is having an ultrasound, while her husband crunches through a bag of Doritos, much to his wife’s dismay. She apparently finds it an inappropriate time and place to be scarfing down chips. While he mindlessly enjoys his snack, we can see the unborn child on the monitor showing some interest in his (or her) dad’s Doritos. When the wife gets mad and throws a chip across the room…the baby decides to fly out after it.

NARAL failed to see the attempt at humor in the ad because they claimed it “humanizes a fetus”. Under the #NotBuyingIt, Twitter lit up throughout the game with tweets on spots they saw as sexist, and used #MediaWeLike for those that passed their politically correct test. Some of the other commercials that raised their ire: A Buick ad showing a wedding (for showing women fighting over a bouquet; an Audi ad (for having no female astronauts) and a Snickers ad (for being “transphobic” and claims it’s saying it’s “OK to objectify women as long as they have a snack”).

I have to comment on their objections to 2 of those ads. First, the Audi ad, called “Commander” is touching and nostalgic. It shows an elderly man who had once been an astronaut tearfully looking at photos on the wall of his glory days in space. Then his grandson comes by, and during a ride in an Audi R8, the older man’s spirits are lifted as a David Bowie tune plays. The NARAL complaint that there were no women astronauts shown is idiotic since there were not likely to have been any female astronauts back in his day.

Secondly, the Snickers spot is pretty clever and says absolutely nothing about objectifying women. Had the nags at NARAL bothered to check, they’d know that it’s one of a series of such ads telling viewers that people aren’t quite themselves when they’re hungry–until they have a Snickers. This is the “Marilyn Monroe” ad that spoofs her famous white-dress-blowing-up-around-her scene from the 1955 film “The Seven-Year Itch”. At first we see a director filming “Marilyn”, which is really a disgruntled dude in a white dress and heels—until someone gives him a snickers bar. Lo and behold, he is transformed into the real Marilyn now that Snickers has taken care of her hunger pangs. Snickers aired a similar commercial during last year’s Super Bowl with characters from “The Brady Bunch.” Talk about missing the whole point (and having no sense of humor).

They did manage to find at least one commercial that didn’t offend them, like the one by Axe for men called “Find Your Magic”. They liked that one because it showed “non-traditional” images of men…like a guy wearing high heels dancing in a nightclub.

As for that Doritos ad, perhaps the crazies at NARAL should get a grip and ask themselves why humanizing the “product of conception” (as Planned Parenthood clinics refer to the unborn) between two humans is wrong, offensive, extreme, etc. That’s not the image of a cat, a chicken or anything else on the ultrasound screen—it’s the image of a human being, and that’s the fact they can never get around. The personhood of the “fetus” upsets them because it forces them to see just what it is that is being destroyed on their altar of choice.

Super Bowls are known for their commercials and this year, sponsors paid $5million for a 30-second spot…but when they get people talking, tweeting and writing about their ads—for better or worse—that’s worth every penny. 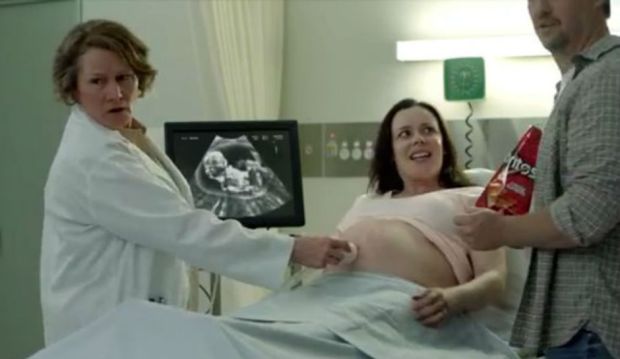 The ad that made abortion supporters cringe.