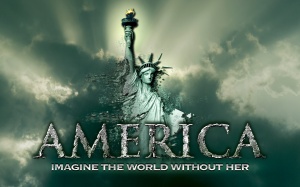 The creator of one of the highest-grossing documentaries in box-office history has paired once again with an Academy-Award-winning producer to bring another unsettling scenario to the big screen as we prepare to celebrate America’s 238th birthday.

Dinesh D’Souza (2016: Obama’s America) and Gerald Molen (Shindler’s List) present viewers with the question: What if the United States of America had never been? In fact, the movie’s subtitle invites us to “imagine the world without her.”

The film first faces the critics of America head-on by breaking down the arguments that the radical left has made against this country: it was founded on racism, genocide, oppression and theft. These beliefs are behind their desire to see the country get taken down a few pegs—to a point where we’re no longer a leader in the world. D’Souza interviews those who hold these beliefs (and have passed them onto younger generations), like Ward Churchill. He was a college professor best known for his disparaging remarks about the victims of 9/11 shortly after that event. Sitting through this portion of the film gave me some idea of what it must be like to be a conservative student on nearly any college campus today, where history, economics and pretty much any other subject are presented from the point of view of the left.

This was really a strong point of the movie. By setting up the fact there’s been an effort among many in our society who wish to undermine the American idea—and backing it up with interviews—D’Souza shows us that not everyone who lives here or who was born here loves it here. This is important to establish up front, as he then goes one by one, refuting each claim made against America. He does this quite well using news clips and more interviews that give the story of America the balance it deserves.

America isn’t just a series of news clips and sit-down interviews, however. Dramatic re-enactments are used effectively throughout the movie to bring moments in history, and those who made history, to life. We see General George Washington commanding his troops; President Abraham Lincoln giving his last speech before being gunned down by an assassin’s bullet; former slave-turned-abolitionist Frederick Douglass, and the experience of one Vietnam POW at the Hanoi Hilton.

D’Souza and co-director John Sullivan (2016: Obama’s America) are skilled storytellers, as they bring the audience into the past, all the while making connections to today. Anyone who may not be familiar with the teachings of Saul Alinsky will come away from this film with a better understanding of who he was and how his radical views have come full circle in the current occupant of the White House, as well as the woman who hopes to follow him (Hillary Clinton).

While watching America, you get a sense of how important it is to learn American history, and how much has already been lost due to revisionism. After all, you can’t really know where you’re going until you know where you’ve been. D’Souza maintains that America is now at a crossroads. As other generations have had to step up to preserve and protect the nation at various points in time, it’s now up to us to restore America. As he says in the film, “We need another Washington or Lincoln or Reagan…but we don’t have them. We have us.”

America is a feast for history lovers, but it’s also got a great soundtrack. Stay through the end credits and enjoy an uplifting—and rocking—new version of “The Star-Spangled Banner” by a group I’ve never heard of called Madison Rising. They call themselves “America’s most patriotic rock band” and it’s worth sticking around for a listen. You may even want to download it to accompany you on your Independence Day Weekend activities. 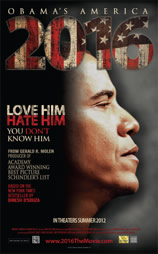 Love him or hate him, you don’t know him…The movie’s promotional tagline gives an ominous hint to what you’ll see if you go to the theater this weekend to check out the film “2016: Obama’s America”. This documentary is the work of Academy Award-winning producer Gerald R. Molen (“Shindler’s List”) and New York Times best-selling author Dinesh D’Souza (The Roots of Obama’s Rage).  In fact, this film is  sort of a continuation of the ideas presented in the Rage book, which I wrote about last year in my post, “The Book Everyone Should Read Before 2012”

If you’ve read Rage, you know that it presents the premise that the reason why Obama has made decisions that seem contrary to the good of the nation to many of us, were made by him based on his being raised to believe that the West, and America in particular, needs to be brought down in order to “get even” for what he sees as the evil of our colonialism and exploitation of the Third World.  Why else would he shut down domestic oil drilling, but promote it in places like Brazil?  As the film explains in shocking detail, it’s all about re-distributing wealth—not just from one American to another, but from America to the Third World.  In other words, in Obama’s global vision, YOU, America, are the evil One Percent.

The film attempts to understand Obama’s mindset by travelling to the places that affected him as a child.  It goes to Indonesia, where he spent a good portion of his childhood and to Kenya, where his father (a man he hardly knew) came from and where he developed his anti-colonial/ anti-West views.  While in Kenya, D’Souza sits down to talk with a man we’ve all heard of but have rarely seen:  Barack Obama’s half-brother, George Obama.  This was one of the most interesting parts of the film.  Although living in extreme poverty in a tiny hut in Nairobi, George Obama holds no expectation that his wealthy and powerful older sibling should do anything for him.  Nor does this member of the Obama family hold the same anti-colonialist views as his father and half-brother in the White House.  In fact, he discusses the differences between other nations such as Malaysia, Singapore and South Africa that were once on a par economically with Kenya.  He says now those nations are practically developed, while Kenya still continues to struggle—so it was not, he believes, colonialism that has held Kenya back.

An odd twist to the George Obama story was an incident that happened outside the film, but it reveals quite a bit about the president.  According to an article written this week by Dinesh D’Souza, George called him asking him for $1,000 to pay a medical bill because his son was in the hospital.  After speaking with a nurse, D’Souza agreed to wire the money to George for his son, but not before he asked him, “Why are you coming to me?”  D’Souza writes in his account of the incident:  “He said, ‘I have no one else to ask.’ Then he said something that astounded me, ‘Dinesh, you are like a brother to me.’’

As you would assume in a film called “2016”, predictions are made for the future, based on what has already been.  It’s pretty frightening too.  The film reminds us of the candid conversation between President Obama and Russian President Dmitri Medvedev, when Obama (caught on an open microphone), told him he needed “space” and “After my election I have more flexibility” to deal with things like missile defense.  The film tells us the sad truth:  when Obama entered office, we had 5,000 nuclear warheads.  Now we have 1500- his goal is to take it down to 300!  All the while, the other nations of the world (China and Russia) are kicking theirs into high gear- and Obama has done nothing to stop Iran from getting nuclear power.

Providing for the common defense is one of only a handful of things the Constitution says the federal government is supposed to do, yet in 2016, if Obama has his way, America will be a much weaker, more mediocre nation- just another nation among the nations of the earth.  But the film doesn’t leave us without some hope.  D’Souza leaves us with the knowledge that what happens in 2016 is not up to Barack Obama- it’s up to We the People.  Are you registered to vote?