There was a meme going around on Facebook a while back that surely was put together by someone (or a group of people) who undoubtedly think of themselves as open-minded, tolerant, live-and-let-live types. They would also have to be pretty ignorant of what’s going on given their pat answers to questions such as “Don’t like gay marriage? Don’t get one”; Don’t like abortion? Don’t have one”. (Unfortunately, there’s more—see below).

Given the events of this past Friday, let’s just focus on the gay “marriage” question. I wonder what words of wisdom the creator of that meme would have for all the people of faith who have lost businesses and livelihoods because they refused to take part in someone else’s gay “marriage” ceremony? What consolation—if any—do they have today now that the Supreme Court decided to expand the definition of marriage to allow for two people of the same sex to have the designation of “married” partners? Do they care, that in doing this the court told millions of people like myself, “To hell with your vote—we know what’s best!” My guess is, the author(s) of that meme couldn’t care less. In states where we voted to uphold one man/one woman unions as being the only true marriage, these black-robed strangers changed our states’ constitutions against our will. Legislating from the bench was not what the founders intended, but it’s now the way it is—even the highest court in the land isn’t immune to playing politics.

As with most major news events, there’s a bigger—mostly-untold—story that needs to see the light of day. The decision last Friday didn’t close down any gay and lesbian activist organizations now that “marriage equality” has been achieved.  With this newfound freedom and boldness, will they now be more forthcoming about what it is they really want? Marriage equality, in the minds of many activists, is only the beginning.

According to Masha Gessen, an outspoken LGBT activist, gays should be allowed to be married, but calls it a ‘no-brainer” that marriage as an institution should not exist. In 2012 she stated: “Fighting for gay marriage generally involves lying about what we’re going to do with marriage when we get there. Because we lie, that the institution of marriage isn’t going to change, and that is a lie.” [emphasis mine].

And then there’s this admission from Paula Ettelbrick of the National Gay and Lesbian Task Force: “Being queer means pushing the parameters of sex and family, and in the process, transforming the very fabric of society. … We must keep our eyes on the goal … of radically reordering society’s views of reality.”

This militant “gay liberation movement” has been around for decades, and its disdain for traditional genders, gender roles and the nuclear family are apparent throughout the Manifesto of the Gay Liberation Front, published in London in 1971 and revised in 1978. The authors of this manifesto claim homosexuals are an oppressed group and were determined then—and now—to erase any tradition they see as undermining or squelching their alternative lifestyles. They advocate for “gay communes” and ideals that clearly threaten any free-enterprise/ capitalist society. Reaching far beyond sex issues and gender roles, this Manifesto states: “…besides the practical hang-ups of finding money and a place large enough for a collective to live in, there are our own personal hang-ups: we have to change our attitudes to our personal property, to our lovers, to our day-to day priorities in work and leisure, even to our need for privacy.” (Just as a side note: when you write something and call it a ”manifesto”, history tells us that you have serious mental issues which are usually so severe as to be dangerous to yourself and others.)

While the activists celebrate their victory, the truth is this: marriage is what it has always been: one man and one woman vowing before God (in most cases) to live as one until death they do part. Marriage not only pre-dates the Supreme Court, it pre-dates homosexuality. In the early days of our Republic, marriages weren’t the business of the state, they were the business of the church, and many people still see it that way.

I don’t think most people, Christian or otherwise, care what other people do in their bedrooms. Go and love who you want and unite your lives, but call it something else, because the word “marriage” is already taken. Also, don’t cry “hater” when my pastor or a Catholic priest refuse to preside over your union—go find one who will.  It can’t be that difficult at this point in time.

While there are other pressing issues in our nation, we should worry about the agenda that remains under-reported because it threatens everything the majority of us have known to be true. Militant activists now have the Supreme Court to do for them and their minority what they could never accomplish at the ballot box. That’s something to worry about. 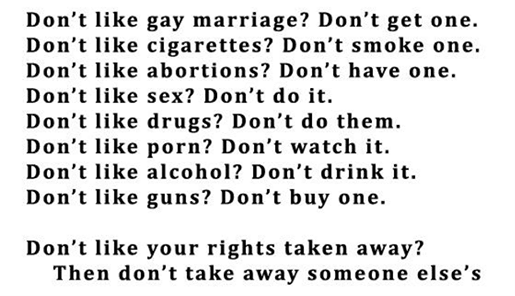 What’s in a meme? Apparently more than this one tells us